Before exploring a forest to map nests of mound building wood ants (Formica species) it is useful to some research. The internet search-tool Google and social media platforms are a good way to start with. The results vary from photo’s from a single nest by hikers that shared their interesting discovery to full inventories of ants. Sometimes it is possible to find exact nest-positions by analyzing landscape, coordinates of even detailed maps.  Also Google Maps and Google Street view are a useful resource (fig.1). In 2019 and 2020 it is used to explore roadsides in the Utrechtse Heuvelrug area in the Netherlands. Major roads are covered by this tool, showing photos of roadsides, sometimes even during several years. In this region several nests were discovered this way and confirmed by visiting them during a field-trip. This article describes how to use Google maps and Google Earth, using the region of Hjøllund in Denmark as example.

Google Street view offers useful information, not only for mapping but also monitoring. To collect this data two tables in an MS access database were created: one for nests and coordinates and one for nest-observations. The Nest-table (fig. 2) contains a column [Nest-ID], used to give any nest an unique number and location: [longitude] and [latitude]. The Nest-ID contains a code for the resource (Google in this case), a code for the region and a unique number starting with 1, then 2 and so on.

The second table (fig. 3) containing observation-data does also contain the [Nest-ID] field, supplemented with an [year] column. This field contains the year the photo was taken. Sometimes, when lucky, the tool provides photos from different years. Then multiple records are created containing the same [nest-ID], but different [year]-inputs. Other fields in the table are [length], [width] and [height]. It is not possible to measure the exact nests sizes, but these entries give some indication of nests size and health. Nests that have a remarkable height in comparison with the with are probably still inhabited. Comparison of nest-sizes in different years gives information about the development of nests during time. This is the moment Google Street view becomes a monitoring tool. The last field in the table is [remarks], to enter information about damage, specific vegetation or other things that are worth to mention.

A combined use of Google Street-view and Google Earth is recommended. Google Earth provides the option to place points  on a map and to store theme. It is useful to use the Street view tool to explore the roadsides. It does not have the option to look at the photos from previous years. This is where the web tool Google maps and Google Street views comes in: by visiting the position that was captured in Google Earth, you can now open the same spot in Street view. In this tool photos from previous years can be found (Fig. 4 + 5)

At this point there is a table with collected data and a map in Google Earth. The red lines are added to mark the road sides that are explored. De red pins mark the exact nest-positions (fig. 6). The next step is to save this map-data in a file format, so it can be used as layers in Qgis, a free Geographic Information System. Two files are created: a file with nest-positions “Nests_Hjøllund.kml” and a file with the roadsides “Roadsides_Hjøllund.kml”.

Then these two files are opened as two layers in a new Qgis Project, with an OpenStreetMap layer as background and the Denmark KM. raster, that is available as a reference.

This Google empowered Wood ant inventory resulted in 217 nests and 293 observations (fig. 7). Not all roads are covered by Google, but the main roads are. In comparison with the Google exploration at the Utrechtse Heuvelrug, this Hjøllund exploration is an indication that the  density of nests is very high. Also in some other Google Explorations no other area was found with this high number of nests in the roadsides. What it tells is that these forests are a good habitat for wood ants. It also raises a question: why is the density of woodants so high in this region? Is this the result of a wood-ant friendly forest management? Or are wood ants so well represented by nature? 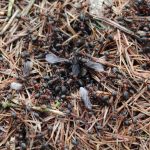 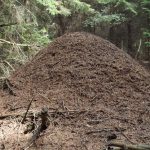 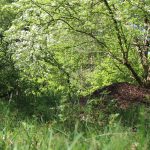 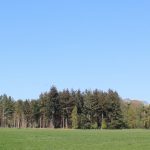 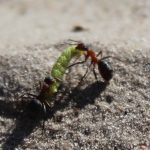 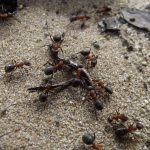